That’s not the worst of it, though.

Knoss’ IP was traced to a number of obscene comments on an internet article about Cooper suspect Kenny Christiansen. Knoss goes on the attack against everyone no matter where he is on the internet, and has been banned from practically every website on Cooper.

Part of Knoss’ theory about the hijacking is that it was pulled off by Richard Floyd McCoy, the perpetrator of ANOTHER hijacking a few months after the DB Cooper gig. McCoy was caught soon afterward. More than a few people still believe that McCoy and Cooper were one and the same, so at first glance Knoss’ theory appears reasonable. But appearances CAN be deceiving.

Houston, We Have a Problem: Knoss also insists that he is in communication with Richard Floyd McCoy today, and that’s how he knows all of this. But McCoy was killed by the FBI in Virginia Beach on November 9, 1974. He had escaped Federal prison a few months previously, and when the FBI finally tracked him down…he was foolish enough to go for a gun and got a 12-gauge blast of buckshot in his chest. He died soon afterward.

Basically, when people look up ‘DB Cooper Nuts’ in the dictionary, a picture of Bob Knoss usually appears. After a while, I decided to create some cartoons about him, some of which are shown below. 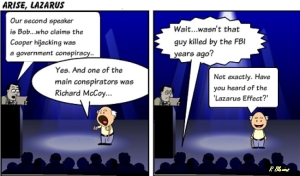 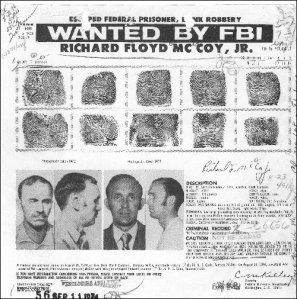