January 11, 2011:   America was introduced to a new suspect in the unsolved DB Cooper case, Kenny Christiansen.

Christiansen, an unhappy employee of Northwest Airlines at the time of the hijacking, and a former WW2 paratrooper, was a reletive newcomer to the suspect list. He first came to light in October 2007 as the subject of an article in New York Magazine by best-selling author (Skyjack) Geoff Gray.

Christiansen soon turned out to be one of the most viable suspects in the case, despite detractors. After the book Into The Blast emerged detailing the initial evidence, History Channel produced and aired an episode on Christiansen for their show Brad Meltzer’s Decoded. Not only was a hiding spot discovered in his attic by former prosecutor and now-judge Scott Rolle, but alleged accomplice Bernard Wayne Geestman of Port Angeles, WA was later found to be lying to the cast of the show on key points. Geestman pointed to Christiansen as the hijacker, but witnesses verified he was WITH Christiansen for the entire week the hijacking occurred. Geestman also claimed to be at Ken Christiansen’s deathbed in 1994, when in reality he merely called on the phone. Since he hadn’t contacted Christiansen in many years, the most likely scenario is that he wanted to see if Christiansen planned on a last-minute confession. His ex-wife Margie pointed to him as an accomplice in a half-dozen or more interviews, and admitted in her final interview that it was Christiansen who was with her husband the week of the crime. After all of this emerged, she sold her ranch in Twisp, WA for a half-million bucks to Washington Fish and Game and told her lawyer and bank officer to not reveal where she was headed next.

Shortly after Bernie Geestman’s phone call to him, Christiansen told his brothers Lyle and Oliver while he lay dying:

“There is something you should know, but I cannot tell you…”

SCREENSHOT BELOW: (Newsvine is no longer in operation, but we have the article stored in files.) 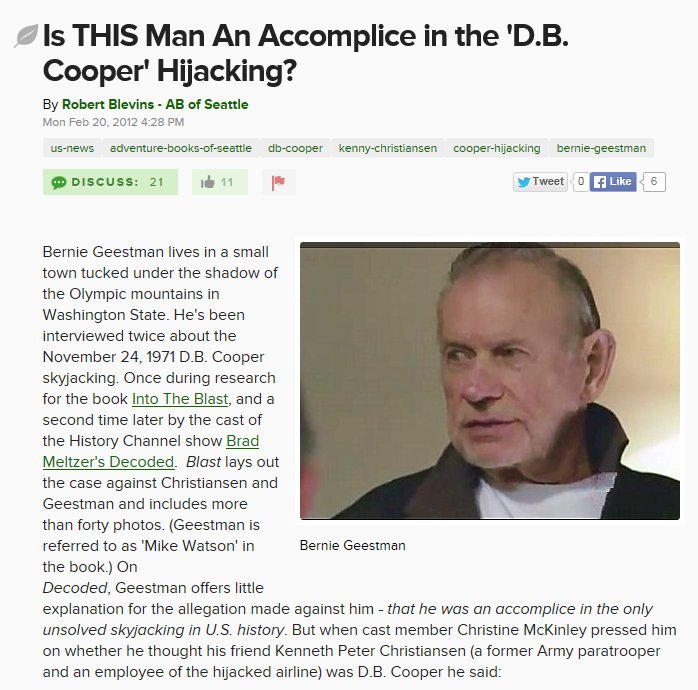 Four and a half years after the Decoded episode aired, a 74-page illustrated report file containing names, witness testimony, pictures, and key documents was submitted to the Seattle F.B.I. by the staff of Adventure Books of Seattle. It was the end result of an investigation that took years and included multiple interviews in the Northwest USA.

Link to the Decoded episode on Christiansen:

In the picture below, Christiansen is shown walking into his apartment in Sumner, WA between the Thanksgiving and Christmas of the hijacking. The picture is dated by the developer, as pictures were back then, and was found after Kenny died. He lived alone at the Rainier View Apartments, number J-3, which still exists today. Picture shows him having less hair than the hijacker, but witnesses who knew him for years testified he owned a toupee and sometimes wore it socially, although not on the job. One of the passengers who had seen Cooper extensively during the flight told the Washington State History Museum recently in an interview that he thought the hijacker may have been wearing a toupee. Christiansen is also carrying a paper bag and a briefcase, the same type of items carried on board the hijacked aircraft by Cooper. 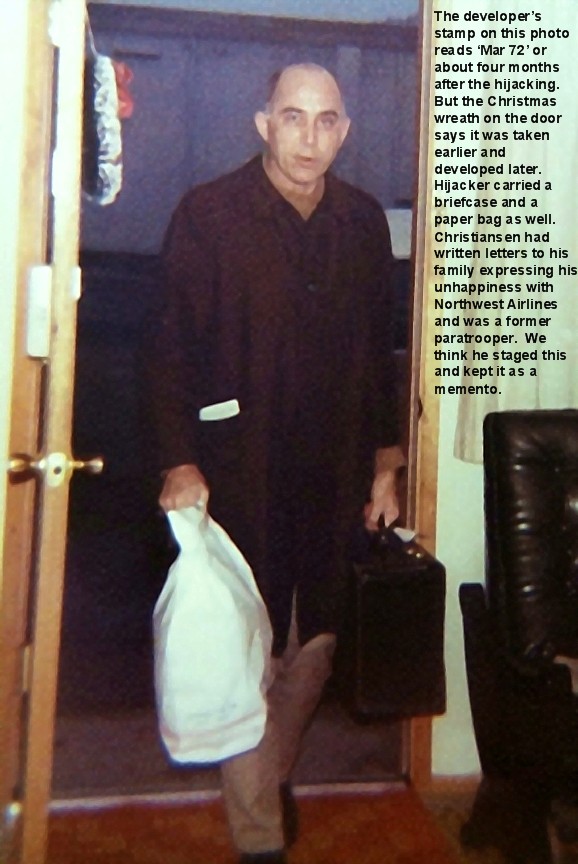