(UPDATE: A 30-minute video has been uploaded to YouTube with Kyle’s interview. We apologize in advance for the traffic noise, which was unavoidable. The area of Bonney Lake, WA where Kenny Christiansen’s old house sits today has been built up tremendously in the last few years, but it was the place we HAD to film the video. The video is linked at the end of this article.)

Two weeks ago, a man I will call ‘Kyle’ approached me through Facebook with an incredible story. Kyle, who is a 33-year-old resident of Bonney Lake, Washington, said that he had watched a rerun of the Brad Meltzer’s Decoded TV episode on DB Cooper suspect Kenny Christiansen. While he was watching, he said, he heard the part where the cast and this writer discuss the urban rumor that Kenny had buried some cash on the empty lot (a wooded hill) he owned behind the main house.

Kyle said he was not a big fan of D.B. Cooper, although he had heard of him and knew the basic story, but few details beyond the general things known by most folks in the Great Northwest. However, when he saw the part about the possibility of buried money, he said he recognized Kenny’s house as the same place in Bonney Lake that he and some of his friends often played as kids. Not down the hill at the house itself, but up on the hill in the woods behind the house. He claimed he was the one who found the rumored money, and it wasn’t a rumor at all. It was TRUE, he said. And he could prove it.

Of course, I get contacts about the Cooper case from time to time. Some are well-meaning, others are just plain crazy. My job is to filter the wheat from the chaff. So the first thing I did was to qualify him as a witness. I checked his Facebook page, his history on Google, and his friends’ list. Everything seemed normal enough. Kyle liked to post up about his vehicle, BBQ’s, his girlfriend – basically the usual stuff you see from a normal Facebook user. I checked his employment. He was a shoe salesman for an upscale department store chain in Bellevue. He had been trying to reach me for a couple of weeks, he said.

So far, so good. But did he have any proof of his claim?

He said:  “I have pictures of the money. And I wasn’t the only one who was there when we found it.”

“Yes,” he said. “My friends and I were playing up there when we found it.”

Kyle’s story was becoming more interesting by the minute. Now he claimed he not only could provide other witnesses to the find, but had pictures of the money. I checked Kyle out further and found he was local to the Bonney Lake/Sumner area and had graduated from Sumner High School. His childhood home address was just a short distance from Kenny Christiansen’s house. We exchanged a few messages, and then I asked him to meet me for an initial interview at the Rock Pizza and Tavern in Lakeland Hills, a neighborhood between Auburn and Bonney Lake. He agreed, and we met there on the evening of July 20th for about an hour.

I found him to be a rather unassuming type, not given to bragging or lying as far as I could tell. He had started researching the Cooper case through our main Adventure Books of Seattle website soon after he saw the Decoded program, and finally contacted me. It was a part of history, he said. He added that if he had known the money he and his friends had found twenty years ago was possibly part of the Cooper case, that I should know about it. I told him that back in 2010, my co-author Skipp Porteous had run an ad in the Bonney Lake Herald for a month asking if anyone could confirm the story of money being found behind Kenny’s house after he died, but that we had gotten no results. He was amazed we would actually do that.

Then Kyle sent me a picture taken soon after the money was found. It showed rows of dirt-stained twenty-dollar bills on a dining room table totaling $880, a wadded up bundle of twenties, and four small plastic bags of partial bills and shards. The bags had been carefully marked with the approximate value of what was inside. That picture is not presented in this public article, but can be seen at the Adventure Books Discussion Forum under the DB Cooper thread. (You must register to view or post at the forum, which is a private discussion site for fans and supporters of Adventure Books.)

Kyle said the money was soon turned over to the Bonney Lake Police Department, and eventually the boys were paid the full amount in new bills. The final total of the money that could be identified enough for replacement was about $1,400, he said.

After hearing Kyle’s story, seeing the pictures, and assessing his credibility, I asked him to assist me in shooting a video at the actual site where the money was found. That video has been completed, and will soon be uploaded to the AB Forum. It provides many more details, and Kyle’s amazing story in much greater depth than this article.

One thing that Kyle said about the money really caught my attention. The money was not just buried in the ground. Someone had dug a square hole, placed several thin pieces of wood inside to line the hole – top, sides, and bottom – placed the plastic bag of money inside, and then covered the whole thing with dirt. It had come to light when one of his friends tripped over a piece of this wood while playing. The area had been recently cleared by a logging company when the former owner of the lot sold off the trees. The logging operation left behind stumps, plenty of wood scrap, and finally revealed the money.

It occurred to me that this ‘wooden box’ was much like the hiding spot Christiansen constructed in his own attic, the one found by the cast of the Decoded show. 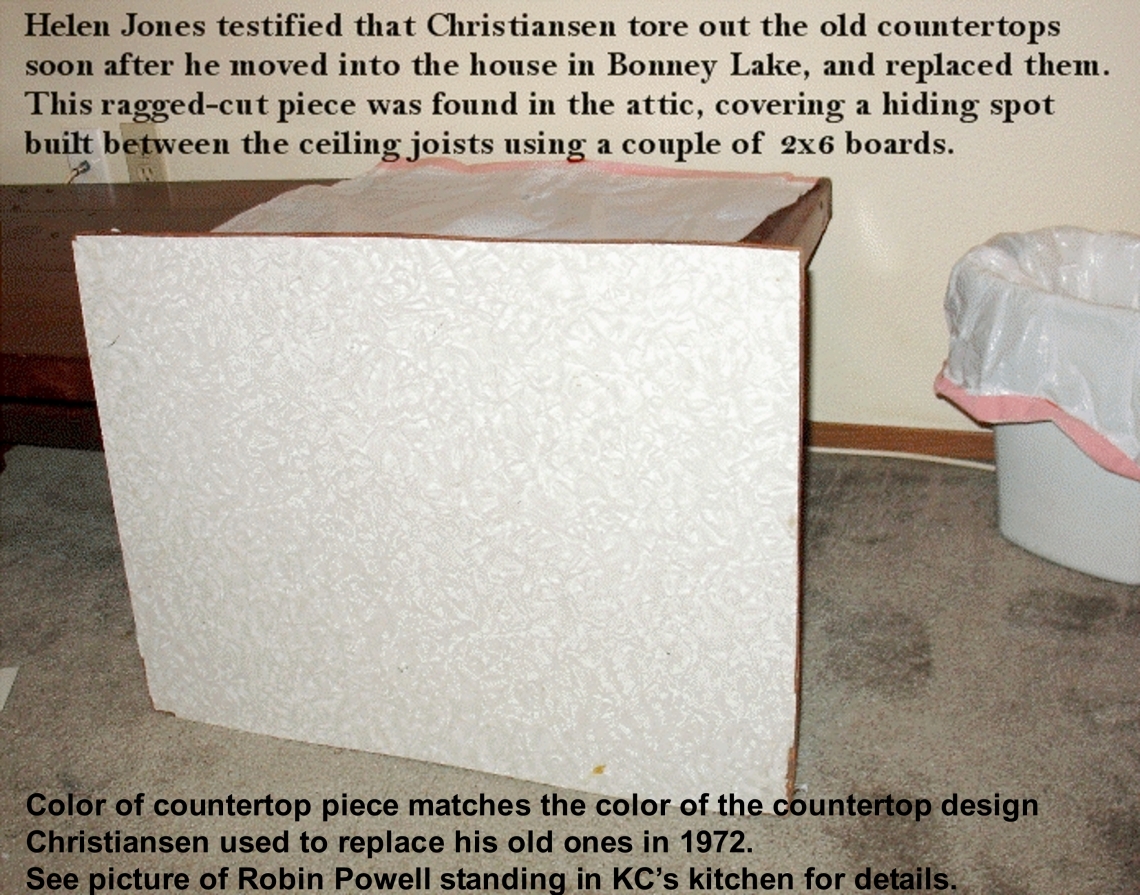 Questions regarding this article may be directed to adventurebooksofseattle@gmail.com

New video on this below: