Day one of a two-day shoot in the Seattle area by Minnow Films started with the crew showing up to a private home in Kent, Washington early in the morning. The first thing that the director asked this writer was WHY I had declined being filmed in my own home:

“Cooper nuts,” I said. “They will take stills from the movie and put them all over the internet, probably with smart-ass memes attached to them.” It was a bit of a joke, but the truth is I am a very private person and have never allowed filming at my home. Instead, I asked some friends of Adventure Books if we could use their house for the shoot while they were gone for a couple of weeks in Mexico. They agreed.

They were set up to roll the cameras in less than an hour. Production coordinator Anna (last name withheld for now) sat on the floor off-camera and took notes while the director asked questions about the case against Kenny Christiansen and Bernie Geestman. (Christiansen is alleged as Cooper, and Geestman the friend who assisted him on the ground.) The crew told me something about the movie that I didn’t know. They said it wasn’t an hour-long documentary for television, but a full-length feature film that would be submitted to film festivals before its actual release in theaters.

The questions came as fast and as furious as Vin Diesel driving a modded Toyota Supra. The cameraman was switching out 128GB memory cards like he was dealing blackjack. I was asked to connect the dots, and present evidence in more detail than I had ever done previously. The director asked questions about the questions, while I racked my brain to give them the most accurate results I could. We took breaks occasionally, but the friendly grilling went on for more than three hours, finally wrapping in mid-afternoon.

In one segment, they asked me to point to the pictures on the display boards I had created for the movie, and explain what each item meant, and how it related to the hijacking.

In another segment, I gave a full version on how the hijacking was most likely done, starting from the time Kenny and Bernie left Bonney Lake, Washington the day prior to the hijacking – until they returned almost a week later. I went into detail about what we call, The Picture, telling the crew that we believed it was a staged memento taken after the two men returned to Kenny’s apartment after the hijacking of Flight 305. 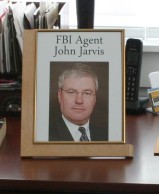 One of the key segments came when I showed a framed picture of Quantico-based F.B.I. agent and behavioral profiler John Jarvis. At a Washington Nationals baseball game in August 2016 (just a month after the F.B.I. closed the book on Cooper) Jarvis had told three solid witnesses (all with security clearances) that the REAL reason they closed the case was because they knew the identity of the hijacker, and that he was dead anyway. When pressed a bit by witness Troy Bentz, Jarvis indicated that the identity of Cooper was none other than Kenny Christiansen. This was a high point of the entire shoot, since I went into some detail on Bentz’ identity, as well as his work for the U.S. Navy in the Washington, D.C. area. (Bentz’ complete testimony can be seen on THIS article.) 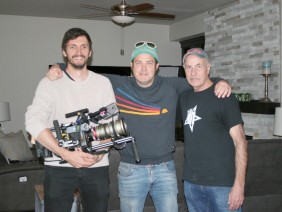 When the crew finally wrapped for the afternoon, everyone said they were very happy with my performance. I told them I wasn’t acting, but that this was real life and they laughed, mainly because they now had a better understanding of the Cooper Vortex. I was asked to accompany them to the next day’s filming. Bernie Geestman’s niece (Now sixty-two years old with four children) has agreed to be interviewed about her claim that she saw Kenny Christiansen at her uncle’s house in a shed out back. And that Kenny was busy creating the phony bomb he would use shortly afterward to hijack Flight 305.

Since the niece first related this story to me, additional evidence has emerged that seems to back her testimony, some of it from F.B.I. files. That is covered in another article.

Conclusion of this article is HERE.