Eric Ulis, the organizer and host of the 2018 ‘D.B. Cooper Convention,’ and the story of how he deliberately trashed the largest DB Cooper event ever conceived…after he was invited to host it.

Taken from the original post at Dropzone dot com, the website for skydivers, this report is from Robert Blevins, co-founder and managing editor for Adventure Books of Seattle.

2) This request came in from Jim Brunberg, owner/operator of the famous Mississippi Studios in Portland, and Bryan Ward, owner of the V-23 Brewery in Vancouver, WA. Both of them thought there should be a new version of the party that had been held at the Ariel Store for well over 25 years. I agreed to help them. Mississippi Studios is a combination bar/music venue with stage/and recording studio. It is also equipped with a screen for movies. The V-23 is a brewery that names all of its beers after people or subjects related to the hijacking. The brewery wanted to help sponsor the event. Brunberg wanted to provide the venue.

3) Brunberg insisted that ALL people connected to the Cooper case should be included in the program for this event.

(Below: A picture of the Mississippi Studios stage. The bar is an adjoining room.) 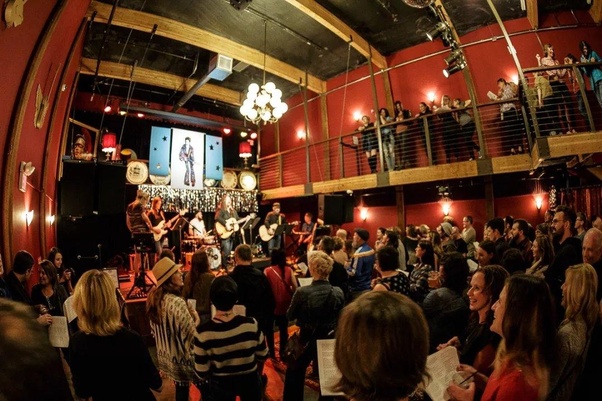 4)  AB of Seattle arranged for the cast of the TV show Brad Meltzer’s Decoded to make an appearance, as well as a famous Hollywood actor who has appeared in a dozen successful films. He had recently come on board a production staff assigned to shoot the first dramatic feature film on the D. B. Cooper hijacking.

5) Although the Decoded cast (Scott Rolle, Christine McKinley, and Buddy Levy) have been associated with the Cooper case on television, their main desire was to appear for general fans of the show, and not so much the Cooper case itself.

6) Jim Brunberg and I discovered that Eric Ulis was planning on holding his next Cooper Convention on the same weekend as the new version of the Cooper Party. It was mutually decided it would be better to invite Eric to host this program, and ask him if he wanted to combine the Party with his Convention, so as not to create a conflict with Cooper fans, and generate as much interest (and attendance) as possible.

7) We invited known speakers in Cooperland, such as author Bradley Cooper, who spoke at the last Cooper Con and who gladly agreed to participate.

BELOW: The cast of Decoded and yours truly. 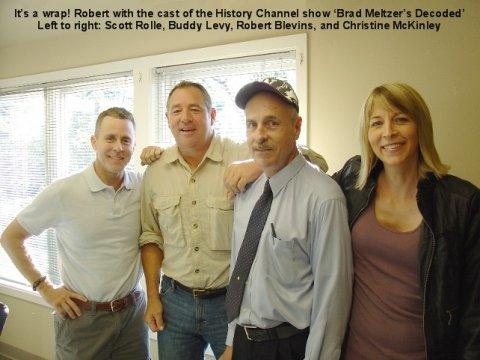 8) Although some discussion about renting a larger venue in Portland (such as Revolution Hall) was done, it was decided to hold the event at Mississippi Studios to keep costs down.

9) Both Brunberg and AB of Seattle staff created short films on the subject of the Cooper hijacking for presentation at the party. Any live music would be arranged by Brunberg. Oregon Public Broadcasting was approached, and showed interest in filming the entire event for television.

10) It was agreed to approach Eric Ulis and ask him to not only host the event, but encourage him to combine his Cooper Con with the Cooper Party. Brunberg asked Ulis to take the reins, and insisted he work in cooperation with the people who had done the groundwork and the planning.

11) Eric agreed to this, in an email that went out to several of the organizers and guests, as well as Dave Brown, the founder of The D.B. Cooper Forum. (Brown got burned when he allowed Eric Ulis to create his own video channel onsite, and then later Ulis deleted all the videos.) At the same time, Adventure Books of Seattle decided to put up between $1,000-$1,500 in Amazon gift cards, to be used as prizes in a Cooper Character Lookalike Contest at the event.

Looking at all of these things, we had no doubt this combination event would be the largest-ever D.B. Cooper party ever held in the Great Northwest.

12) Almost immediately, it became obvious that Eric Ulis had absolutely no intention of following up on his promise, and started ignoring the messages being sent to him regarding the event. After a few weeks, we finally had to tell the cast of Decoded and the kid actor/producer from Hollywood that the event was going nowhere. At the same time, Ulis began releasing a daily series of videos on the Cooper case, and refusing to respond to requests asking him to provide details on what he planned to do for the combination event. Eventually, AB of Seattle withdrew from the whole event, and our scheduled guests were informed.

13) It is our belief that when offered the chance to host the event, Eric Ulis simply trashed everyone’s hard work on purpose because he saw the combination event as a threat to him, and did what he had to do to ensure it would never happen. These issues, and others regarding Ulis, will be addressed in August at the next AB of Seattle Cooper campout on a couple of videos, with accompanying articles at WordPress and Quora. (The public is invited to participate.) Our view is that Eric’s selfishness was not only vindictive, but wasted everyone’s time and effort. In a message sent to me shortly after Eric was assigned the hosting job, this is an excerpt from the email I received from Jim Brunberg:

‘I’m leaving it up to Eric, since he is the most “neutral” of the bunch, and was already planning an event. I was being inundated with a lot of stuff that I really don’t want to be a part of – I’m delighted by the research and theories and story itself, but I want nothing to do with any of the disagreement or bad blood between the parties. It’s impossible for someone like me to step in and solve issues like those in the group are experiencing, but everyone seems to agree that Eric is the right guy to run the event. I’ll supply the space and a lot of enthusiasm about the topic, but I don’t want to have anything to do with trying to sort through any of the issues. I hope you can ALL work it out and have a wonderful time!

As it turned out, Eric’s ‘neutrality’ was a farce, and all he managed to do was trash the entire event the second Jim Brunberg trusted him to host. As far as Jim’s reference to ‘being inundated’ he means he was getting mass emails from a few select people in Cooperland who were trying to trash the event as well, most of whom would not have attended anyway. Eric’s job, which he didn’t even ATTEMPT to do, was to bring everyone together for the biggest Cooper event in history. He simply decided he didn’t want to share the stage with anyone, not even the headliners we arranged, who would have actually filled the seats. Instead, he used Jim’s generous offer to make sure the whole thing went down the tubes for his own benefit.

(At the writing of this article, Eric Ulis has lost much support with D.B. Cooper fans. Last year’s convention was poorly attended, although he has another one scheduled for this year in Vancouver, WA. His last interaction with the public on Cooper has been trying to organize boat tours on the Columbia River for fifty bucks a pop.) He claims they all sold out, but our information says it was only the first one, and no one bought tickets to the remainder. In addition, a woman has come forward to Adventure Books recently, claiming that her best friend was stalked by Ulis after the 2018 convention he hosted at a Portland hotel. Ulis went public at Dropzone dot com and claimed his ex-wife was behind it all. We found out Eric was charged with domestic violence in Seattle when he was married, and that he and his wife are now divorced. (We believe the messages, which are highly detailed, are TRUE.)

BELOW: A cartoon on what we think will actually happen with this year’s ‘Cooper Con,’ which we believe is an appropriate name for the whole affair. One change this year:  He wants to charge people fifteen bucks a pop to attend this time, instead of being a free event. The name ‘Bruce’ in the cartoon refers to amateur Cooper investigator Bruce Smith, who often supports Ulis’ efforts.

UPDATE: On August 22, 2019 the video shown below on this subject was released at YouTube.