As Cooperland entered the 48th year since the infamous (and yet unsolved) hijacking, it turned out to be one of the most controversial yet. Overall though, 2019 had more ups than downs. A general month-by-month review of key events and happenings. Some dates are approximate:

January – The film company in Los Angeles, whose name is still being held confidential, exercised their option for an additional year with Robert Blevins at Adventure Books of Seattle, and announced that a famous Hollywood star had joined the production staff. This young star, who has appeared in more than a dozen successful pictures, meets with Blevins in Seattle to discuss how to approach the first dramatic feature film ever done on the Cooper case. The meeting lasts for two hours and is done at a famous hamburger joint on Queen Anne Hill in Seattle.

ABOVE: Mississippi Studios in Portland, Oregon.

February – After four months of planning, a replacement for the now-defunct D.B. Cooper Day party in Ariel is announced. It is to be held in Portland, Oregon at Mississippi Studios, a combination bar/cafe/music venue on Stark Street. Cooper Convention founder Eric Ulis is asked to host. Elis agrees, but later backs out in favor of a smaller event in the Vancouver area. It is later discovered that Ulis had no intention of hosting the event in the first place, and only accepted the job to make sure it never happened. However, exact details on what motivated Ulis to do this do not fully emerge until November.

March – Darren Schaefer, creator of The Cooper Vortex, a podcast that interviews different people associated with the Cooper case, releases his seventh installment, an interview with Nicholas Broughton. Nick presents his evidence that James Klansnic, a former Boeing employee, was actually Cooper. Bruce Smith, creator of the news blog Mountain News out of Eatonville, WA turns down an offer of $15,000 to consult on script accuracy on the Cooper movie being planned down in Los Angeles. Smith doesn’t believe a movie is actually coming, and demands to speak to producers directly. But since the production staff has assigned author Robert Blevins to fill the script accuracy slot, they refuse to contact him and later write him off. Crazy comments Smith allows at his blog by mostly anonymous people don’t help his case. In the world of hard core Cooper fans, Smith is a big hit. With the production company in Los Angeles, he is seen as non-trustworthy and irresponsible. Blevins tells the production executives in a phone call that even if Smith were signed to the picture, he would probably violate any confidentiality agreement he were asked to sign.

April – After four years in ‘the slammer,’ the famous D.B. Cooper discussion thread at Dropzone (biggest website in the world for skydivers) has finally been unfrozen. New posts are now allowed with a warning from the administrator that personal attacks will no longer be tolerated. Cooper fans begin swarming to the thread once again, some posting up comments, others just lurk and read the site. The D.B. Cooper Forum run by Dave Brown out of Florida is no longer the only game in town. Some comments soon appear on Brown’s site by members, saying that the Dropzone thread should never have been reopened. Another in a series of ‘DB Cooper Campouts’ is held near Shelton, WA the month prior, but lowland snow levels mean only a dozen people show up.

BELOW: A picture from the April campout. 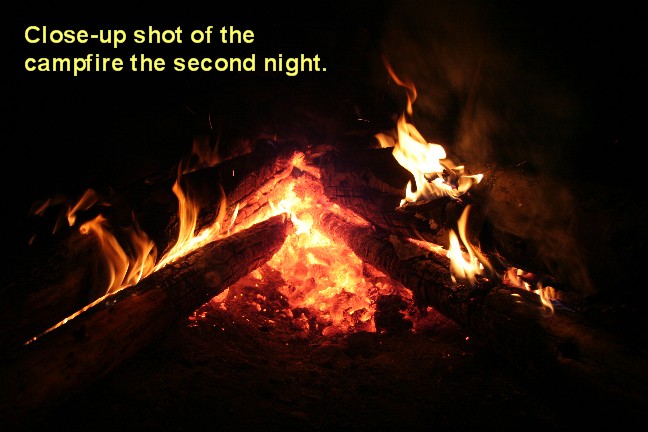 May – The film production company in Los Angeles planning the D.B. Cooper movie announces they have narrowed down the list of possible screenwriters to about ten or so. They recruit ten-page treatments from them to determine who will be selected to do the screenplay. At the same time, a second production company, a larger one, decides to come on board in partnership for the movie. Robert Blevins at Adventure Books of Seattle announces another ‘DB Cooper Campout,’ this time to be held in Mt. Hood National Forest in Oregon. A campout earlier in the year, scheduled for April, met with only modest success when snow levels drop in the Olympic National Forest. The Mt. Hood campout is the first one where actual maps to the meetup point and other details are released to the public. Unfortunately, several threats appear at Bruce Smith’s Mountain News blog soon thereafter. The meetup point in Estacada, Oregon is changed at the last minute, and the public is dis-invited. Attendance is less than a dozen people, and it is decided not to go out of Washington state for any further campouts.

BELOW: A map showing the location of the June campout to Oregon.

June – The Mt. Hood campout is held, with limited success. The main problem being that the organizers simply asked people to drive too far. Some previous attendees decided to skip this one, due to the 400-mile round trip to the campsite. To make things worse, the campsite was only a mile from a designated shooting pit that was heavily used over the weekend. Fortunately, most of the fun happens at night when the shooters depart. It is decided to hold any future Cooper Campouts back in the Olympic Mountains, where several good spots with privacy and quiet already exist.

July – Robert Blevins at Adventure Books, after the last two Cooper Campouts having only modest success, decides it is time to up the ante. AB staff purchase a media projector with a ten foot screen, and upgrades the bathroom and shower facility with a flush toilet. They also add a large public day shelter and start scouting spots where cell signal is still possible, so that attendees can make calls and check their email. Over at the Dropzone discussion thread on Cooper, someone begins spamming the site with massive numbers of posts and duplicate pictures. When banned, the person involved keeps re-registering under a different username. Eventually, the admin simply bans his IP address and are finally rid of him.

August – Another Cooper Campout is held at a test site in the Olympic Mountains, about twenty miles northwest of Shelton, WA. It is done with little fanfare and almost no advance announcement. Eighteen people show up for the event, although some are drop-ins over the weekend. It is a welcome change from the last two, which were only minimally successful. There is a free barbecue for the attendees, and two media sources. Power stations are added so people can charge their devices. Some people play video games on the big screen. Eric Ulis continues to release his daily ‘Cooper Bite’ videos at YouTube, but later deletes every single one of them from the site. His explanation is that he is moving on to ‘something bigger,’ but doesn’t specify what ‘bigger’ actually is. By a strange coincidence, he does the deletions only a day or two after Adventure Books of Seattle says they are planning to review all of the videos at once, which they later do.

BELOW: From a later article on Ulis, this shows how Adventure Books of Seattle staff actually view Eric Ulis and his occasional deceptions with the public. 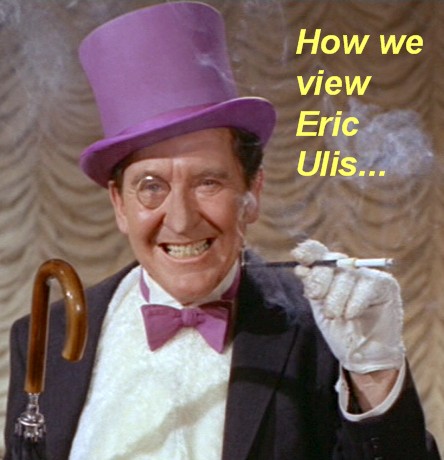 September – Robert Blevins at Adventure Books gets word that the production companies in Los Angeles have narrowed down the list of possible screenwriters to two. Some discussion begins on possibly shooting the picture in 2020, instead of waiting for the 50th anniversary of the hijacking, which comes in 2021. Bruce Smith at the Mountain News accuses Blevins publicly of assaulting him at the final Ariel Store Cooper Day party, where Blevins was a sponsor. Blevins responds with a very harsh article.   Eric Ulis announces that his 2019 Cooper Con will be held at the Kiggins Theater in Vancouver, WA, in November. He had previously accepted the hosting job for another Cooper event, and never had any intention of following through on it. The ‘why’ on that was not discovered until later, and through a newspaper article in the Columbian, a newspaper based in Vancouver, WA.

October – A year after the filming of the D.B. Cooper documentary by John Dower and company at Minnow Films, no movie has been released, but a document appears showing that the film company has registered a holding company for the movie. This is usually done for tax purposes. Robert Blevins sends Minnow a message asking for updates on a release, but gets no response. Finally, Robert is directed to a post by a European film group where the movie is announced. Adventure Books of Seattle says that they will no longer support Darren Schaeffer’s podcast, The Cooper Vortex, on the internet due to his support for Eric Ulis, but they will continue to download the episodes and make them available at their Cooper Campouts.

BELOW: A picture of the main production staff from Minnow Films, taken during their shoot in Kent, WA.

November – Ulis holds his Cooper Con event and claims about a hundred attendees. It is discovered through an article at the Columbian newspaper that the reason Ulis accepted the hosting job at the previously planned event in Portland, was so he could make sure it did not happen. Ulis had been under pressure from Rob Bertrand at Northwest Escape, an entertainment venue in Vancouver, as well as the Kiggins Theater owners, to hold an event in Vancouver, rather than Portland. Several people become very angry over Ulis’ deception, and refused to attend the event at the Kiggins theater. Robert Blevins gets word that the production companies in Los Angeles will extend their option on his book and the investigatory files related to it for another year. Blevins announces he will use the option money to upgrade a planned Cooper Campout the following spring, and that this campout will be held at a drive-to spot in the Olympic National Forest. Over at Quora dot com, Blevins’ Everything D.B. Cooper  gains 1,700 followers in its first year, and his contributions at Quora reach two million views.

BELOW: Header image for the Everything D.B. Cooper site at Quora.

December – As Christmas and the New Year approach, discussions about the case slow down a bit in favor of family and the holidays. Robert Blevins announces at Dropzone that a script has been created for the upcoming movie on the Cooper case, and that he plans to approve it. Blevins states that an award-winning actress has been cast for the part of Flight 305 stewardess Tina Mucklow. Bruce Smith at the Mountain News says he will not be available for discussions because he is visiting his mother in New York state again, as is usual for him. Due to the Eric Ulis fiasco, Adventure Books staff decides to ignore him in future and Robert Blevins says, “They do their thing, and we do ours…” and adds he will have nothing more to do with Eric Ulis, or anything Ulis organizes publicly in the Cooper case.  Blevins posts up a comprehensive update on the Cooper movie at Dropzone, while thanking his supporters, and blasting his critics – in no uncertain terms.

All in all, it was an interesting year. Some conflict and controversy. Some positive activity. Always interesting.