One thing about the D.B. Cooper case that makes it different, as in:

Is the amount of internet craziness going on within Cooperland that can get really wacko sometimes. Everyone thinks they have the right suspect. Others will play games, or tell any ridiculous tale to support their angle in the case. Sometimes the angle isn’t a suspect, but something else. Cornering the internet forum traffic related to Cooper, perhaps. Not to really solve the case on such forums, but to fritter away the time discussing it. Most of these discussions rehash the same old evidence and go nowhere.

There’s nothing wrong with discussions about old DB, of course. What makes the Cooper case different is when you start proposing a certain person may have been Cooper, and submit REAL evidence about that person. Then the claws come out, the wagons circle, and the dirty tricks emerge. Fear raises its ugly head, and loathing follows.

Unlike the Jimmy Hoffa case, or Scorpio, or even Jack the Ripper – SOLVING the D.B. Cooper case would be a horror to many of the people who discuss it. This is because actually solving it would mean the end of discussion and no more mystery. To them, it’s like trying to swallow a golf ball, or being forced to eat a plateful of sauerkraut laced with raw sardines. Not a pretty picture.

The jealousy among Cooper fans is rampant and predictable. This writer was once foolish enough to open his own discussion forum on the case. I named it: The Adventure Books D.B. Cooper Forum. At first, I tried to do it nicely. Listed all the suspects and their entries from Wikipedia, posted up about our upcoming eclipse campout to Oregon, and other reletively harmless stuff. I shouldn’t have bothered, since it turned out to be a waste of time.

It wasn’t long before other Cooper fans discovered the site and we got as high as twenty members, some of them were even relatives of Cooper suspect Kenny Christiansen, the guy they were proposing on making the first DB Cooper movie about down in Hollywood. (I later canceled my media contract with the production company over script issues.) But then I made a BIG mistake. I let it slip that the film producers planned to name Kenny as Cooper, not as a guess, or a maybe, but as a matter of historical record. Their decision was based on evidence I hadn’t revealed to the public, and I had to sign a confidentiality agreement to keep my trap shut regarding details on the movie. My mistake was telling Cooperland about the ‘historical record’ stuff.

It wasn’t long before Cooperland went ballistic, of course….

Cooperland is a relatively small group these days, and one reason is because the Cooper hijacking happened more than forty-five years ago. Most people today under the age of thirty-five have barely heard of the D.B. Cooper case. Cooperland has one main internet presence, which you can find easily on Google, but I won’t list here. When the members of this site found out what I was telling people regarding the upcoming Cooper film, then the negativity started oozing from the woodwork. Insults, lies, a special page created especially to discredit just ONE suspect…Christiansen…all of it appeared at this website. For safety’s sake, (mine – not yours) we will call this website ‘Cooper Heaven’.

Over here at Adventure Books, Cooper Heaven was old news. Literally hundreds of negative postings have appeared there about us over the last four years, but most of them were basically harmless. Like the time they compared us to ISIS, called us parasites, or idiots. Some of it was laughable. But it took an ugly turn when they started calling us liars, and began misrepresenting the actual case against Christiansen, and coming after people we knew in a very personal way. This writer got angry after he found his name and address posted to their site, and retaliated by posting up the phone number of the guy who did it.

Well, the forum got shut down because of that, of course. I should have known better, as the Beatles once said. I put up another discussion forum, but the attacks continued anyway. I started responding to them, not so much with insults, but quoting them over on certain points regarding Kenny Christiansen, and listing the truth on those points.

This of course…could not be allowed by Cooper Heaven. They started monitoring our forum like hawks circling their prey. But the end came not from Cooper Heaven directly, but an even STRANGER source. Someone they had banned from their own site. We later called this whole thing, The Nicky Incident.

“Something must be done to stop them!” (Meaning Robert Blevins and Adventure Books of Seattle) 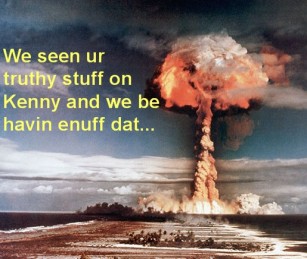 It came to a head when I released a preliminary article claiming a senior FBI agent had allegedly fingered Christiansen as the hijacker in front of three solid witnesses. Finally, a former member of Cooper Heaven (‘Nicky’) convinced me he was actually a nice guy, and I allowed him to join OUR site. The next day, he found some minor post that was apparently a Term of Service violation on our part, and we were closed down again. ‘Nicky’ then emailed us and said that he was hired by the guy who owned the Cooper Heaven website, and he was coming after us to do even MORE damage. I had to go public on this issue, since I could not contact the owner, and it spiraled totally out of control. As it turned out, the guy had been banned by Cooper Heaven, and was a complete renegade. But sometimes that’s the sort of people you find inhabiting Cooperland. It turned out he trashed our site simply to gain favor with Cooper Heaven, and perhaps be re-admitted to their website. That’s how crazy it is in Cooperland.

On May 6th of this year, I finally decided enough was enough. I closed down our third version of the Adventure Books Forum on my own, and for good. I told the owner of Cooper Heaven HE could deal with the Cooper nuts. (“They’re YOUR problem now…”) We also removed his site from our DB Cooper Info Page as a Recommended Resource, and if people ask me if they should join Cooper Heaven, I tell them sure… but it’s better for them if they DON’T mention that Kenny Christiansen might be a good suspect in the hijacking.

To see Part Two of this series, click HERE.

To see the full and complete article on the FBI agent’s revelation to the three witnesses, click HERE.