‘As for RMB, he is a dangerous man and an ineffective investigator, in my view, who has also threatened me with bodily harm (Ariel Tavern, 2016), and arrest (Auburn PD). I have written about his many escapades with frequency. Whatever I have said about RMB is well-deserved, and I stand by every single word…’

Bruce Smith, (shown above) a guy who believes he is the be-all and end-all of everything regarding the Cooper case, finally resorted to outright lying. Only this time he got caught at it. His opinions on my talents as an investigator are moot, but when he started claiming he was threatened at the last Cooper Days ever held at the Ariel Store, it was time to bring out the truth.

Auburn Police Department, Auburn, WA: The city holds an annual Auburn Days Festival each year during the second weekend of August. In 2010, I was scheduled to do my first presentation for the public on Cooper suspect Kenny Christiansen. This was done at the old Auburn Avenue Theater in the heart of downtown, where the festival is held.

On the morning of the event, someone called in to City Hall and said that ‘people would be hurt’ if I did the presentation. I was called to task by the festival director and asked if I had any idea who might have made the phone call. Since I was kind of new to Cooperland, I told the director that the only person I knew who was involved in the Cooper case, and who was LOCAL to the area…was a guy named Bruce Smith. I had not met him at the time, but it was the only name I had. The Auburn PD had pictures of him printed up and given to an officer who was assigned to keep watch on the theater. This was mostly a precaution.

The organizers were very upset, since Auburn Days mostly consists of thousands of families with kids wandering the downtown streets all weekend. If Smith had showed up at the theater for the event, the cops were going to ask him if he made the threatening phone call. If he says no, he can go inside like everyone else, no problem.

Nothing ever came of it, and Smith didn’t attend anyway. Later, he found out what had happened and went ballistic. He was never threatened with arrest and he could have attended had he chosen to do so. Later, we came up with a more likely suspect on who made the phone call, but we were never able to prove it absolutely.

‘Threatened with bodily harm’ – Smith was banned from the final Cooper Days party at the Ariel Store and Tavern in 2016 by owner Bryan Woodruff, because of negative comments Smith made online about the store, as well as Woodruff himself. Because of these things, Bruce was informed by Woodruff prior to the party that he would not be allowed to attend.

In response, Smith lied to a friend of his named Meyer Louie in order to obtain a ride to the Cooper Party anyway. When Woodruff reminded him that he wasn’t welcome, Smith went back up the road about a hundred yards and just sat on a guardrail watching the festivities. Woodruff approached me later and asked if I had any objections to Smith being allowed in. I told him I had no objections, but Woodruff decided not to relent anyway. Smith’s friend, the one who had given him the ride to Ariel, attended for about an hour, but was put off because Smith had lied to him, and now he was forced to drive Smith back to town. He ended up missing most of the party.

Smith’s anger and frustration over not being able to convince owner Bryan Woodruff to relent made him decide to blame me for the whole thing. He then started saying I actually threatened him. The truth is that I never even saw him. And even I can’t toss a punch from at least a hundred yards away. 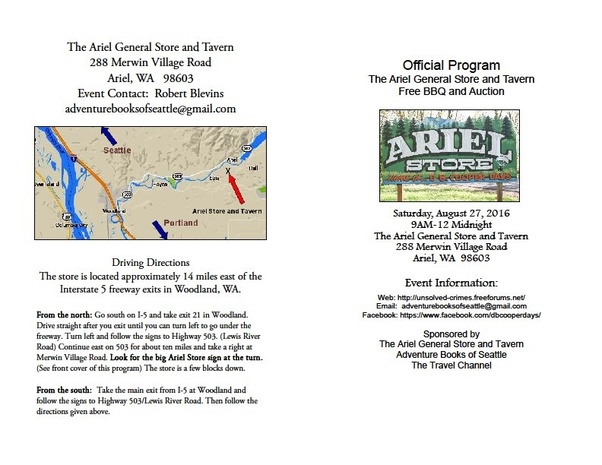 I was busy far away doing BBQ for attendees and working with the crew of the Travel Channel TV show, Expedition Unknown with Josh Gates, who I had convinced to come and do a shoot and interviews at the party. My small press, Adventure Books of Seattle, was one of the main sponsors of the party, providing most of the food and many of the items that were auctioned to pay for repairs to the historical store. The store first opened in 1929.

(Below and above: The program we printed up for the folks attending the event.) 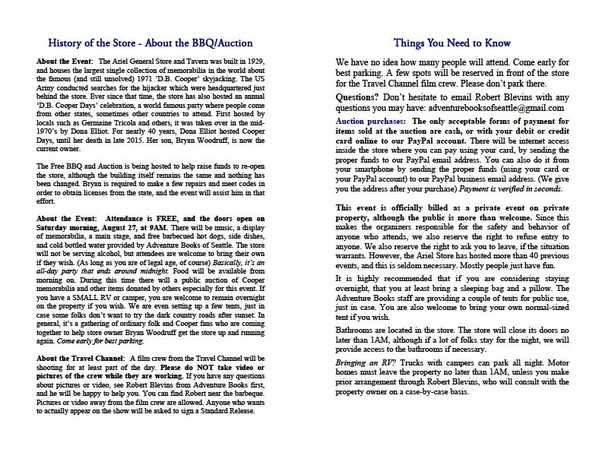 Smith is the author of a DB Cooper book, and runs a blog (Mountain News) in the Eatonville, WA area where he lives. Many of the comments to his articles are hate-based against others, or contain very nasty stuff. I was banned from that site a while back, but this is much like being banned by your cable company from having to pay any further money for service.

In other words, you get used to it pretty quick, and then you realize it is a bonus. 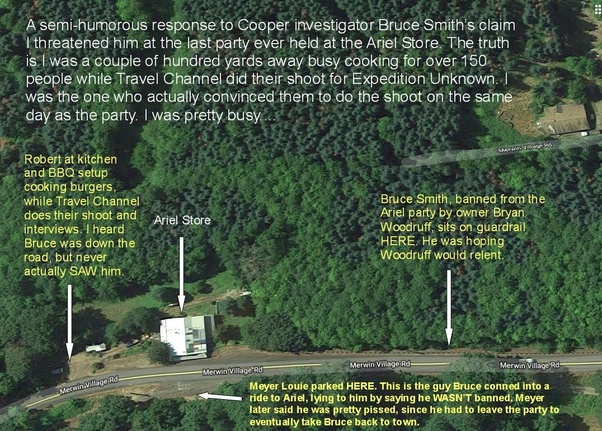